General Info about the Selkirk Rex 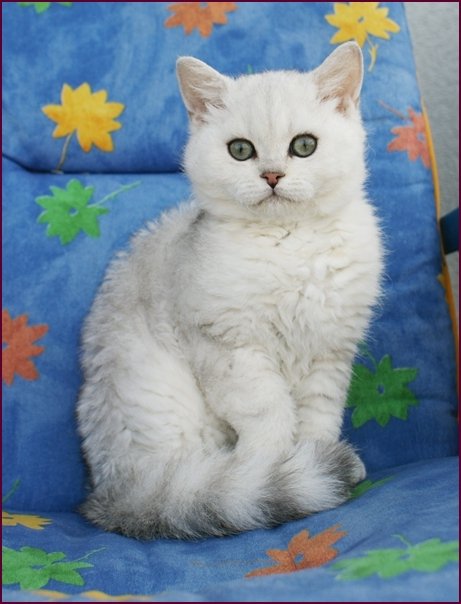 The Selkirk Rex is an easy-going relaxed cat that resembles a soft, stuffed toy that you just want to pick up and hug. One of the rexed breeds, they have a tousled disarray to their dense coats that leads makes them look as though they are having a bad hair day! Sometimes called the cat in sheep's clothing, these gentle cats bring a smile to your face and a warmth to your heart just like that favorite toy did when you were young. These plush-coated, medium-sized cats with solid boning and bodies fill your arms when you pick them up for a quick hug and cuddle.

TICA accepted the Selkirk Rex into the New Breed program in 1990 and recognized it for championship competition in February 1994.

These are loving, patient cats reflecting the temperaments of the breeds used to develop the Selkirk Rex. The British Shorthair contributed the laid-back personality, the Persian added the cuddly nature while the Exotic Shorthair brought an impish playfulness to package. Visitors are always intrigued by the cats and want to touch their coats while owners have incredible urges to pick and hug their charges-fortunately the Selkirk Rex is a patient cat that accepts these human foibles with great tolerance.

Selkirk Rex come in both long and shorthair coats. The shorthairs have a dense, plush curl to the coat that emphasizes the density of the coat and a similarity to a teddy-bear; longhairs have an even more tousled look that emphasizes the similarity to a woolly sheep. And both hair lengths come in a rainbow of colors. Lucky pet owners will always have the best coats on their cats as coats are seen in their prime on mature altered males and spayed females. The curls are most prominent on the flanks, undersides and neck. The thick, plush coat is very soft and falls in loose curls.

They are a medium to large cat with strong, heavy boning giving them a substantial feel but take time to develop to their full maturity. The head is rounded with large round eyes and a sweet expression. The body is slightly rectangular and very muscular resulting in a firm feel under the soft coat.