The Curly Selkirk Rex is a relatively new breed and as such is still not very common. These cats look like real life soft toy Teddy bears , especially the short hairs which look like a washed Teddy bear toy. The Long Hairs look more like a sheep with longer curls.

This breed originated in the USA in 1987 when a 'strange' kitten was born in a shelter. This female kitten attracted the attention of a lady  called Jeri Newman who was a Breeder of Persians who was very interested in Genetics  and who wanted to see if ithis curliness  was a new gene, was dominant or recessive and if it could be reproduced. 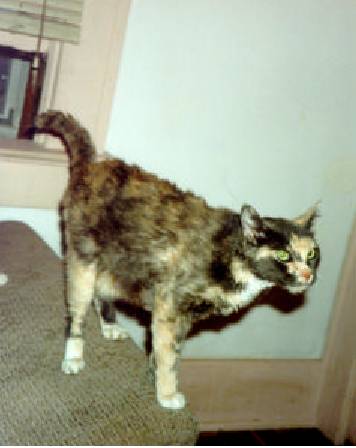 Jeri Newman called the kitten Miss De Pesto as the kitten was a real pest for attention. When Miss De Pesto grew up in 1988 she was mated to a Black Persian. This mating produced 3 curly  haired and 3 straight haired kittens. This confirmed that the gene was dominant as only one copy of the gene was needed to produce curls. One of the kittens was mated back to his mother and the Selkirk Rex breed was now confirmed! Ms Newman named this breed of cats as Selkirk which was also her in-law's surname as well as the name of some mountains. Rex was added to indicate the curly gene. So the Selkirk Rex breed came into being.  The breed was recognised in TICA in 1994 after a lot of hard work by dedicated breeders in the USA who worked to establish the breed.

Miss De Pesto and Breeder Jeri Newman are the founders of this breed which looks like a sheep or a lamb with it's curly coat. The Selkirk Rex has developed greatly from the first litters as out crosses were made to improve the lines and the gene pool.

The Selkirk Rex is found in both Shorthair and Longhair varieties with Homozygous cats having 2 copies of the curly gene and will always produce curly kittens, whilst Heterozygous cats have one copy of the curly gene and will produce a variety of curly and straight haired cats. The straight hairs are called Variants and though they may be useful in a breeding programme cannot be shown as SR as they lack the curls which is the trademark of the breed. These cats can be shown in the pet class not in Championship classes at the shows. Many SR cats can  carry also the pointed gene. 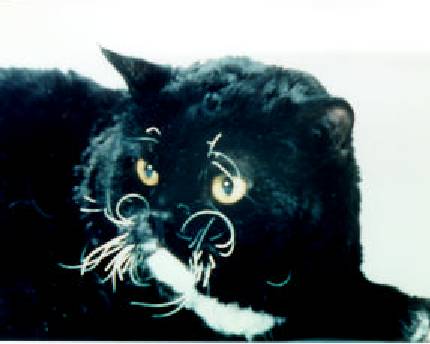 The Selkirk Rex then came to Europe!

The first Selkirk Rex who came to Europe originated from the 3rd Litter of :

This kitten was  was "Noface Grace Slick"who was a blue point / white female Born on 02.10.1990, she went to Mary Harrington in Switzerland. The Selkirk Rex first came to Malta in October 2010 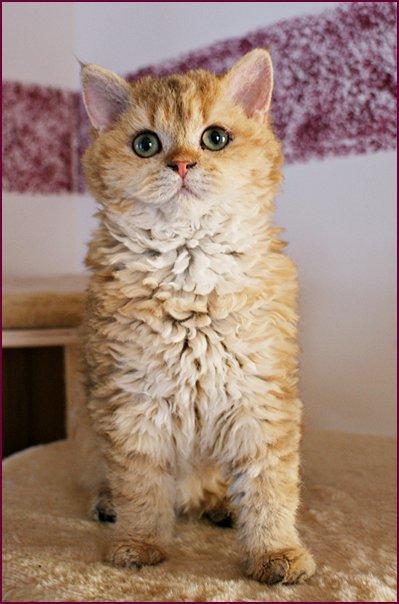 The first Selkirk Rex in Malta  arrived  from Germany on October 6th 2010, this was In Petos Lucky DOB: 7/7/09 – a Golden Chinchilla Homozygous Short hair curly Male –

Lucky came  to Precioushearts Cattery! Lucky was shown for the first time in Malta on 30/31st October 2010 and he was made a Double Grand Champion, doing very well and also winning a SH Ring as Best Cat.

The first Selkirk Rex litter born in Malta was sired by TICA DGC In Petos Lucky who was mated to Precious Silver Angel. This mating produced a Golden Shaded Female kitten  and a Silver Shaded Male Kitten,  both curly and born on 10th March 2011. 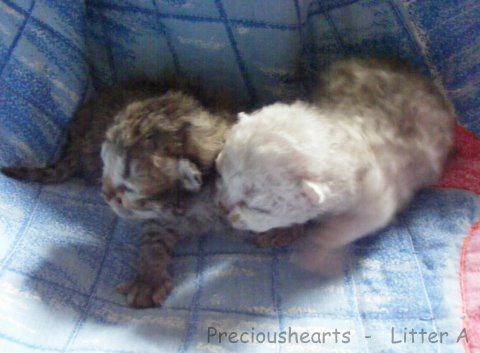 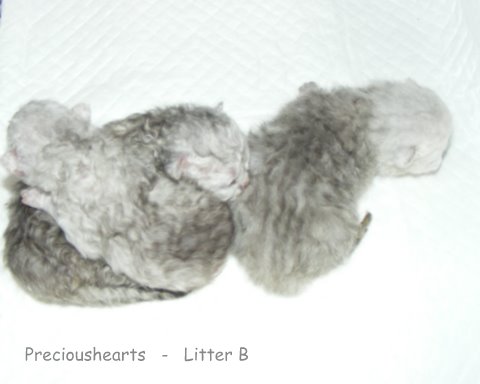 The Selkirk Rex is still a young and developing breed therefore various out crosses are still allowed to improve the gene pool. Out crosses are allowed with the British Breed Group and the Persian Breed group. The ideal Selkirk Rex should not look like British or Persian with curls but is defining it's own 'look' Primarily with a rectangular muzzle and a semi cobby body with surprising weight for the size. The curls need to be defined in both SH and LH. We also find that whatever the out cross breed used has a residual effect on the 'look' of the Selkirk Rex, thus for example if we look at SR from UK where the British influence is strong and the SR from Germany where the Persian influence is strong we can spot some subtle differences. The Selkirk Rex must not have a strong nose break or a flat face, the muzzle should clearly be seen from the side profile, the head should be rounded, the ears are wider at the base and well placed on the head, and the tail is thicker at the base with curls running also along the tail length which tapers off but is not pointed at the tip.

The aim is to have the particular SR breed type fully established by 2015 when only SR x SR matings will ideally  take place.